It’s about lifestyle. Hille’s Home Extensions will work with you, and turn your dreams into reality.

The story of Hille’s Home Extensions started in the early 1960′s when Ray Hille started his building career as an apprentice Carpenter in the Essendon area. During his apprenticeship, Ray became a skilled craftsman and was regarded by his peers as a perfectionist. Ray quickly learned that his clients appreciated a complete approach to the work being undertaken on their homes. 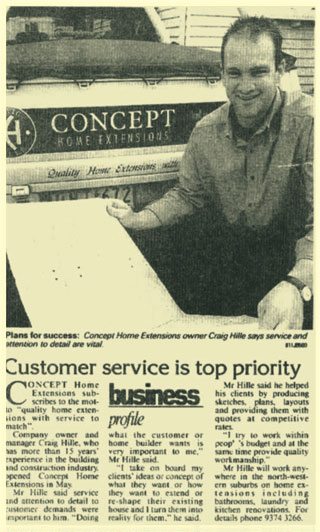 It became apparent to Ray that rather than simply adding a room, clients wanted to improve the functionality, flow and appearance of their home. With an holistic approach as a foundation of the business, Hille’s Home Extensions was born.

Pioneering this concept, Ray went on to change the way extension works were undertaken in his community. For Hille’s Home Extensions, the underpinning philosophy of improving a home – not simply adding a room to a house – yielded delighted clients and a healthy business.

As the business evolved and Ray’s young family grew, his son Craig emerged as a new source of inspiration. Ray encouraged Craig to enter the family business, learn the ropes and to be groomed to one day take Hille’s Home Extensions to the next generation. Craig, then in his early 20′s, brought his own ideas and insights to the business and worked alongside his father for around 8 years.

With fresh direction, inspiration, ideas of a new generation and focus on quality and customer service, Craig has taken Hille’s Home Extensions to new heights.

At ease with changes in technology, abreast of the latest building methods and materials and surrounded by an experienced team of industry professionals and dedicated administration staff, Craig and Hille’s Home Extensions continues to deliver excellent solutions in home extensions and renovations with guaranteed customer satisfaction on every project.